A young man who hails from a minor noble family in Saint's Haven. He is one of the Six Heroes led by Gerrant who participated in The Dragon Raid. At the conclusion of the war, he betrayed his comrades to gain power. He is also a descendant of one of the seven Apostles who serves an unnamed man.

Velskud is cold, dismissive, and cynical. He mostly keeps to himself and takes every opportunity to mock the player. It was later discovered that his cold exterior belied his kind nature; though when the player pointed it out, he simply laughed it off. 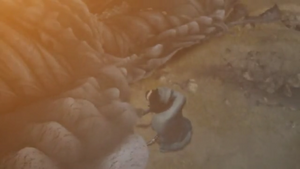 50 years ago, the Black Dragon Karas raised an army and threatened the world of Altera. Gerrant the Gold Dragon sent out a call to arms to all of humanity. Saint's Haven answered the call and sent Velskud to lead the royal army. Along with Varnak of the Free Adventurer's League, Kasarana of the Astral Coven Sorceresses, Nerwin of the Silver Crescent Archers, Terram of the Divine Knights, and led by Gerrant, they formed the Six Heroes.

Although the 5 heroes were horrified by Velskud's betrayal, they decided that it would be best to keep it secret lest it would curtail a huge uproar from the Saint's Haven citizens and royal family. Thus, history recorded the end of the war as the defeat of the Black Dragon due to the noble sacrifice of Velskud. 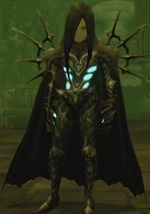 Kalahan studied the lustre and attempted to extract it from Velskud, without result. Kalahan pointed out that Velskud hasn't turned into a dragon yet. Some time later, Velskud decided to escape from Kalahan's laboratory to pursue his own goals. 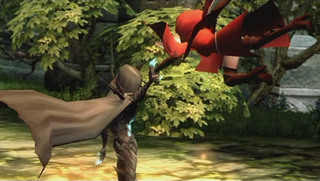 Argenta duels Velskud at Temple of the Sleepers

Velskud first reappeared to seize Rose from the claws of the Harpies, intending to draw the power of the Ancients from Rose to complete his transformation into the Black Dragon. He brought Rose to Forest Sanctuary in attempt to use the machine there to draw out her power but he was interrupted by the player. At this point, the player also found Argenta tracking him down.

Later, he brought Rose to the Temple of the Sleepers. Argenta managed to catch up to him but she was soundly defeated. He then used the machine at the Temple of the Sleepers to draw out the power of the Ancients that lay dormant within Rose and absorbed it into himself. At this point, he fled to Black Mountain Foothills with Rose and returned to his fortress to set up a Nest to thwart any effort to rescue Rose. On the way, he also sabotaged the Atlantis to disable the only mode of transportation between Carderock Pass and Saint's Haven to prevent Argenta from requesting aid to stop him.

Gerrant and the player first meet Velskud at Rockthorn Gorge where the Black Knight taunts Gerrant and runs away. Argenta met up with Gerrant at the Black Sovereign Domain to deliver the news and to enlist his aid. The player then worked with the Saint's Haven Royal Army, Argenta and Gerrant to penetrate Velskud's nest and rescue Rose. In the assault on his fortress, Gerrant dueled Velskud in dragon form while Argenta rescues Rose. Gerrant was blinded while Velskud sustained injury and was taken out of commission. 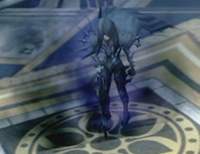 Velskud sustained severe injury from his fight against Gerrant, having his wing ripped off. His lost wing was later found at Black Ark Monarch's Tower. Velskud's sword was also found at Black Ark Monarch's Tower, which according to Stashy, was destroyed himself. Stashy explained that Velskud was fighting against a group of monsters there but he was overwhelmed by monsters. Gerrant sustained slight injury attempting to rescue Velskud, and Velskud was frustrated by his level of strength compared to Gerrant.

Velskud was later transformed into a black bird and taken in the care of Daisy who calls him "Chickie". Daisy requests the player's aid to patch him up.

Eventually Velskud managed to recover and left her without a word. Velskud then visited the Saint's Haven castle basement to corrupt and steal Gerrant's sword, although he mentions that he was actually looking for Ignacio. Later, Velskud explained that Rose had taken over his place as an Apostle.

Velskud was first discovered at Dragon Cultist Base looking down on an unconscious Sidel. He explained that Sidel attacked Kalahan and was defeated. After Sidel returned to Kasarana, the player followed Velskud to confront Kalahan at West Armory. He revealed that Kalahan was serving an unnamed man who wished to gain a dragon's power. Velskud explained that he no longer wished to serve the unnamed man and he that he wanted power for himself. He then warned the player to not get involved with Kalahan and left.