Silhouette of the Six Heroes

Gerrant the Gold Dragon sent out a call to arms to all of humanity. Gerrant led his own group known as the Dragon Slayers and also became the leader of the Six Heroes, which consisted of Velskud of the Saint's Haven Royal Army, Varnak of the Free Adventurer's League, Kasarana of the Astral Coven Sorceresses, Nerwin of the Silver Crescent Archers, and Terram of the Divine Knights.

Argenta was also involved in the war, though she refused to be grouped with them. She insisted that the combined power of Gerrant and her's was enough to defeat the Black Dragon. Argenta paid no attention to the 5 heroes.

Saint's Haven served as the base of the resistance. The people of Saint's Haven got to meet the Six Heroes and celebrated their presence. Scholars such as Stashy did research on the Black Dragon.

While the Six Heroes led the forces against the Black Dragon, Saint's Haven itself was under attack by Elena and her army. Argenta and her forces defended against Elena's assault and she regards Argenta as her rival. 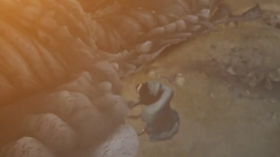 After a long and arduous war, the Six Heroes finally defeated the Black Dragon but it was not without complications. Gerrant turned into his Gold Dragon form to duel the Black Dragon himself. The Six Heroes saw him and were shocked by the fact that Gerrant was actually a dragon. Varnak and Kasarana were disgusted and felt betrayed. Velskud stole the Black Dragon's lustre under the order of Kalahan. The other 5 heroes were too exhausted from the war and were unable to stop Velskud.

Though they were horrified by Velskud's betrayal, they decided that it would be best to keep it secret lest it would curtail a huge uproar from the Saint's Haven citizens and royal family. Thus, history recorded the end of the war as the defeat of the Black Dragon due to the noble sacrifice of Velskud.

The blood that the Black Dragon shed created the Plague Rain, contaminating the surrounding areas including Marissa's Dryspring and Rockthorn Gorge.

Gerrant decided to hunt down Velskud and to collect all the pieces of the Chaos Dragon. Argenta decided to look for Rose, a descendant of the Ancients. Varnak left the leadership of the Free Adventurer's League to Gunther and formed a vigilante group. Kasarana returned to the Astral Coven to tutor future sorceresses including Cynthia and Lady Kaylinn before retiring to Lotus Marsh. Nerwin returned to her home and became their queen. Terram became the pontiff of the Divine Knights.

Gerrant became famous among the citizens of Saint's Haven and his name is spoken for generations to come. History recorded the appearance of his Gold Dragon form fighting against the Black Dragon Karas though no one made the connection between the Gold Dragon and Gerrant. On the other hand, Argenta was mostly forgotten, though Divine Flirtations featured her look as a fashion fad for a period of time.

With the help of the player and Gerrant's explanation, Stashy discovered that the Black Dragon Karas was a weapon created by the Ancients using a piece of the Chaos Dragon.

The Dragon Followers remained active until the present day even after the defeat of the Black Dragon Karas, but they have found a different goal to pursue. Elena retreated and rebuilt her army, and later instigated The Siege of Carderock.