Teram is a Cleric who answered Gerrant's call to fight against the Black Dragon Karas during The Dragon Raid. He led his group of Clerics called the Divine Knights and is known as one of the Six Heroes along with Velskud, Varnak, Kasarana, and Nerwin.

Teram had a friend named Gerwein. Gerwein was a righteous man who joined the Temple Knights and also inspiring Teram to do so. 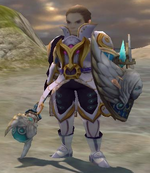 Teram during the Dragon Raid

During The Dragon Raid, Kasarana lost one of her earrings which was a gift from her brother Kalahan at Sunken Cargo Ship . She requested the aid of Teram, Varnak, and Nerwin to look for it. Kasarana blames Teram for the loss of the earring and thus the animosity between the Astral Coven Sorceresses and the Temple Knights began.

After The Dragon Raid[edit | edit source]

At the conclusion of The Dragon Raid, Teram returned to the headquarters of the Temple Knights and became the pontiff. Teram offered Gerwein the position of Bishop but he turned it down because he didn't like to be involved in politics. Gerwein passed away shortly after and he was buried at Ruins of Lost Time.

Teram returns with Rose whom he supposedly single-handedly rescued from the Dragon Cultists. He then follows Rose's advice and prophesies in order to cure a now undead Varnak, obtaining items such as the Mirror of Truth that would supposedly have the power to free Varnak. "Rose" later reveals to be Rosalinde, the new Knight of Kaleon. Meanwhile, he now takes care of a now rapidly aging Velskud.