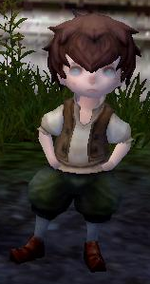 A messy-haired kid who can be found between Loffy the Beggar and the gate to Hermalte Port. He commissions the player several times but pays very grudgingly.

Despite his ragged appearance he has a haughty demeanor and considers himself privileged to be able to live in Saint's Haven. He alludes to having a noble background but the player never gets to determine if his claims are true.

King Cassius III borrows a book of adventures from Shaggy Kid. Shaggy Kid delivers Dorin's message to the player after he was kidnapped by Lena.

Shaggy Kid is revealed to be a fan of Velskud and commissioned the player to investigate the rumor of Velskud's broken sword at Black Ark Monarch's Tower. When the sword was brought to him, he didn't think that it truly belonged to Velskud. Stashy then explained the history behind the sword.