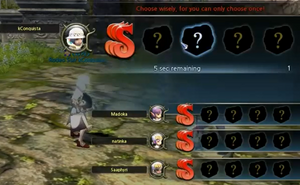 The lottery screen for a full party. The player's selection is shown at the top above those of other members.

The reward lottery (official name currently unknown) is a system for assigning reward items in dungeons. Its purpose is to offer a guaranteed reward at the end of every dungeon as an incentive to complete a run even if the boss loot and chests happen to be worthless.

After the player's score is determined, he or she is presented with a number of blacked out random chests and must select one within a time limit. When one is clicked all the chests are revealed and then opened to show their contents, after which only the contents of the selected chest goes into the player's inventory. Every player in the party is given a separate lottery selection and cannot click on other players' unrevealed chests.

If no chests are clicked within the time limit the game assumes that the player chose the left-most chest and will open it as if it was clicked. The contents will still be awarded.

If the player's inventory is full the item will be lost if it cannot stack but if it is stackable it will be added to an existing incomplete stack in the inventory. The game alerts the player about this requirement several seconds before starting the lottery.

There are four types of chests that may be revealed:

The player's rank determines the types of chests available, which in turn determines their contents. An 'SSS' rank ensures that only Gold and Silver chests appear while Bronze chests appear at 'SS' rank or below (the lower the dungeon level the higher the rank at which Bronze chests may appear). Only one Gold chest can appear even on 'SSS' rank and at lower ranks there may not be any Gold chest in the lottery.

The number of chests that appear in the lottery is determined by a number of factors including the difficulty of the dungeon, the score and the level of the player relative to the dungeon. However, after a certain level most dungeons will yield four chests when completed on Master or Abyss difficulty regardless of the player's performance.