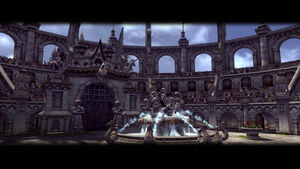 Player versus Player, abbreviated PvP, is when players battle other players.
Players obtain PvP EXP after killing other players, or receive assist EXP after helping kill other players. Players are able to level up their PvP level and acheive a higher PvP Rank displayed by their rank icon.

You may enter the PvP arena when you are level 10. In the channel selection screen, hit the Arena tab and select a channel. Once the channel has loaded, talk to Arena Officer Joseph to Enter the Arena.

There are several maps currently in use in PvP:

In most modes player stats are normalized to level the playing field, so poorly equipped players will find their stats vastly improved while those with cutting edge gear will be weakened (this is why many players strip for PvP). Additionally, in team based modes player hats are invisible and their hair is dyed with the team color.

Players fight to win Ladder Points, which can be used to buy special PvP equipment sets. 1v1 and 3v3 sub-modes are available. Upon entering the Ladder mode, the player is given the option to spectate a match or to begin laddering and if the player chooses to begin he or she will be matched with an opponent in 1v1 mode (average matching time 18 seconds) or be directed to form or join a team in 3v3 mode.

The player first enters the Ladder mode with 1500 Ranking Points. These are distinct from the Ladder Points in that they are only used to match the player with opponents of similar ranking and cannot be used at the PVP store. A player gains Ranking Points (thereby moving up the Ladder) by winning a match in either 1v1 or 3v3 mode and loses points by losing matches (which moves him or her down the ladder).

After 10 matches are won, the player is awarded with 800 Ladder Points and will start gaining or losing them under the same conditions as the Ranking Points. Using the Ladder Points does not reduce the player's ranking, so spent Points become harder to regain as higher ranking opponents are still chosen.

The Ranking Point and Ladder Point penalties for losing a match are always lower than the rewards for winning. PVP Experience and Goddess Medals CANNOT be gained in this mode, nor can Empowerment be used.

16 players fight each other without restriction for ten minute rounds. Players can join or leave freely and the remainder at the end of a round are ranked by the number of kills they attained. PvP experience and Goddess Medals are awarded based on rank.

Players are split into two equal teams, which fight either for ten minutes or until one has been wiped out. Players can leave freely but cannot join during a round and the remainder at the end of a round are ranked by the number of kills they attained, with the winning team members on top regardless of performance. PvP experience and Goddess Medals are awarded based on rank.

Players are split into two equal teams with a random player from each designated as their captain (gaining a special helmet with a large team-colored crest). The teams fight either for ten minutes or until one captain is killed. Players can leave freely but cannot join during a round and the remainder at the end of a round are ranked by the number of kills they attained, with the winning team members on top regardless of performance. PvP experience and Goddess Medals are awarded based on rank.

A few randomly selected players are transformed into Ghouls of varying types while the rest lose all skills and are given Shortbows to replace their weapons (except for Archer classes who get Longbows). The Humans must work together to kill or delay the stronger Ghouls with offensive item pickups while the Ghouls must kill as many Humans as they can with their monster skills to turn them into Ghouls. The Ghouls win if they can convert all Humans in ten minutes, otherwise the Humans win.

Players are placed in a map similar to the map used in Ladder. One assigned player from each team fights each other until one of them dies or one is eliminated based on his/her HP. This process continues until there is a team that finishes off with 1 or more surviving players.

Players can leave and join freely and the remainder at the end of a round are ranked by the number of kills they attained, with the winning team members on top regardless of performance. PvP experience and Goddess Medals are awarded based on rank.

PvP ranks are always displayed before the player's name. Your rank icon changes each time you level in PvP.

In Dragon Nest, killstreaks are obtained when a player kills a certain amount of other players consecutively without dying. 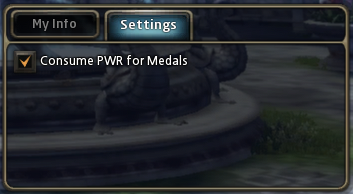 When in the Arena, you can set it so that you consume Empowerment for Goddess's Medals by checking off the "Consume PWR for Medals" option in the settings. Every 2 minutes, you consume 10 PWR in exchange for 1 medal and a set amount of Arena EXP. The medal may be used to purchase items from the Arena Shop.

Upon finishing a match, you will be given a number of medals. Winning the match will give you more medals than if you lost the match. This amount is added on top of the medals earned if you have the PWR Consumption setting on.

The Arena Shop may be accessed through Arena Quartermaster Michael. There he will sell materials used for crafting, plate pouches and other general goods such as lustre pouches.