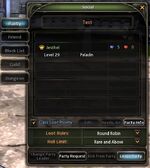 The party interface while in a party.

A party is a group of up to four (4) players who work together to complete certain hard tasks. This makes achievements and higher difficulties easier; while lessening the Empowerment consumption one would experience otherwise.

While in a party, a few things happen:

Setting up a Party[edit | edit source]

To set up a party for people to join, open the Social Panel [Default Keybinding: O] and select the Party Tab. At the bottom of the tab, click the Create Party button.

The party can be customized for whatever situation is needed. The default settings will create a party named after the character (ie. "Name's Party") and have no restrictions on levels or a passcode. When a party is created, the party are put into a panel (See below in Searching for a Party)for everyone to search for.

The options available to create the party reflect what the player's intentions are.

Once created, people will begin to join it per the specifications listed. When the party is full, head to the nearest portal for wherever was selected. If all players are "READY" by standing close to the portal, a confirmation box will appear. Select "OK" to continue.

Searching for a Party[edit | edit source]

To search for a party, simply open the Social Panel and select the Party Tab. The party search interface shows a list of parties that can be joined as long as the character meets the requirements.

Each party has rules and restrictions set up, and while the player can join any party that does not bar them, remember that the party leaders can remove any player from the group. So the player must choose a party that will fit them.

The name of the party can be a significant hint as to what is required to join. Some parties will clarify that a certain class is not welcome; while others will inform the player that they intend to complete dungeons quickly and consecutively (Also know as "Grinding" dungeons) in order to level.

Once the player has joined a party, it is common courtesy to announce yourself and say hello. If the party has reached the requirements needed, head to the portal the party leader has specified. When everyone has reached the portal, the leader will get a confirmation box and the party will move together.

Note that when you are not the party leader you cannot change options like difficulty settings. Only the party leader has the ability to change those options, along with how loot is handled.

Roles are the jobs and duties each player has while in a party. A party has to be somewhat organized to help prevent unwanted deaths, especially in harder difficulties.