Dragon Nest has it's own set of options to play with. There are two option menus: Game Settings and System Settings.

The Game Settings menu controls gameplay options, such as Macros and Video Recordings. 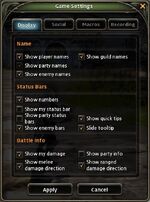 The Display Tab controls what nameplates, numbers, and battle text will be show to the player. 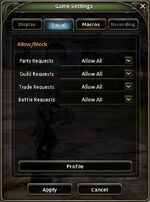 The Social tab allows a player to automatically decline invites of a certain kind, and allows the player to write their own personal intro for people to see (or not see if the player so chooses).

Note that for each of these settings when enabled("Allow All") you will receive confirmation boxes asking if you would like to do so. Setting to "Block All" will remove these confirmation boxes, and send the requester a message saying they were denied.

The Profile button allows you to type a small (53 character limit) paragraph introducing yourself. If you do not select the "Share Profile" checkbox this profile will not be visible to regular players. 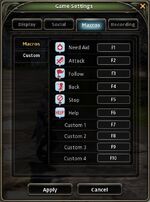 The Macros Tab allows the player to set up quick commands (macros) to announce various things to the party. You can even add up to four(4) custom macros to allow you to send fast messages to your party.

The first six macros cannot be changed at all. All macros will only function in a party.

In the Custom section (not shown) the player can create their own macros that use the F7-F10 keys. These macros must be 25 characters or less in length.

If you wish to reset what the macros can say just click the "Default" button located at the bottom of the Custom section. 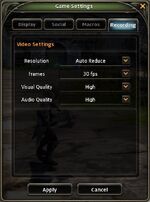 Unlike most games, Dragon Nest has it's own built in recording program, which will allow the player to record what they are doing into a movie (Default Keybinding: Scroll Lock).

This menu controls the quality of the movie. The higher the settings the better the movie, however note that it uses a lot of computer power.

Note that when messing with these options that higher settings are for computers that can handle them. This means that if the player's computer is an older model, then that player should use the less powerful settings.

The System Settings menu controls computer options, such as Sound and Picture quality. 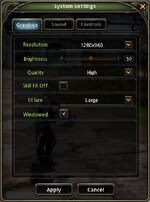 The standard settings for controlling how the game looks. 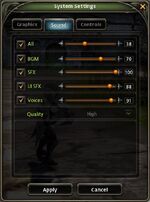 The standard controls for in game music and sound 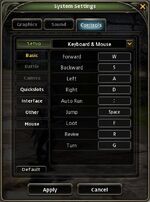 Controls are where a player can set up their own control scheme; allowing them to change keybindings into whatever they choose. Note that mouse buttons are excluded from being used.

At the top of the window there is a drop down allowing the player to switch between a: Keyboard & Mouse, Xbox Controller, or a Custom controller. You can change these settings for each one, and each preset is independent of others.

Note that some options are disabled for the Keyboard and Mouse.

For a detailed look into the controls, see Controls