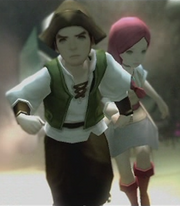 Timothy and Rose running away from a Minotaur at Catacombs

A man who serves the Ironwood Village militia. He tends to stutter when he feels nervous. He makes great effort to rescue Rose from Elena's followers but lost his life and Rose to the Harpies.

Timothy plays a large role during Chapter 1: Archer & Warrior where he was one of the militiamen who were tasked to search for Rose after she has been kidnapped. The player works alongside Timothy to look for Rose. Eventually Timothy finds Rose at the Catacombs and runs away from the monsters with her. 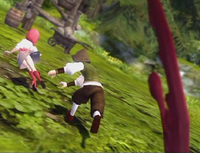 Timothy pushes Rose out of the knife's way

He was later found with Rose at the Ancient Temple Excavation Site where they were running away from a group of Harpies. The Red Harpy, who was the leader, threw a knife in their direction. Timothy pushed Rose out of the way but got stabbed by the knife. The Harpies then kidnaps Rose and flies away.