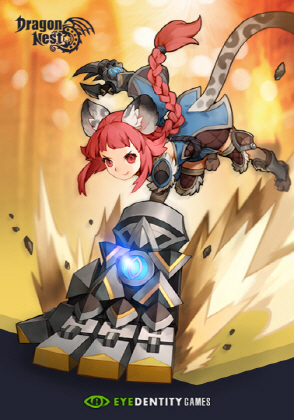 == Description ==
Gender: Female
A melee fighter who uses her giant Knuckle Gear and fancy animal-like moves to subdue enemies and aid allies. She is most affected by Agility and Vitality.

A hybrid girl from the Krita tribe, the Machina cares little for Dragons, Prophets, or the Black Knight. After losing her arm and being separated from her fellow villagers in an airship crash, the Machina goes on a journey to find what remains of her people.

Patrona
Patrona controls the Knuckle Gear freely and she swiftly subdues her opponents with outstanding combat and animal-like moves.

At level 45, Patrona can specialize into either Defensio or Ruina.

Launcher
With the Power of Light, Launcher controls the Blaster that has become part of her body. Her dynamic movements deny any counterattack from enemies.

Launcher controls the power of light to deal vast amounts of damage over large areas.

At level 45, Launcher can specialize into either Impactor or Buster.

After reaching level 15, your character will receive a remote quest. Upon accepting it and talking to Xiaolong, you will be teleported to the Selection Room, where they can choose between the Patrona and Launcher subclasses.