« Back to Rozin Sanctuary 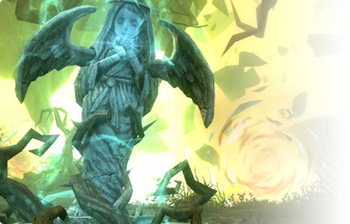 …Sister Lithia told me that if we could only understand the import of the nightmares into the world, we might find a way to awaken the Goddess by healing her psychic trauma. If that is true, what am I to make of the Jealous Atrium where enemies perpetually attack a statue of Althea herself? Does the Goddess hate herself for what she is doing to the world?

-- The Secret Diary of Jacob, sealed by the Cleric’s Order under penalty of death.

Jealous Atrium is a “wave” dungeon. The challenge is to successfully defeat 24 rounds of successively more difficult enemies and protect a statue of the Goddess Althea. In order to pass a wave, you must complete the wave’s victory conditions and prevent the statue from being destroyed. Every player who enters the Jealous Atrium only has one life. Should you die during the challenge, you will no longer be able to affect the battle.

In Jealous Atrium, players must protect the Goddess Statue, fighting through 24 spawns of bosses and monsters. Each run requires an Abyssal Veil, 2 of which are obtained daily through the mailbox. Players must be level 15 or above to enter. During the dungeon, no players will be able to revive. If all players die or if the Goddess Statue runs out of health, the dungeon will end. Depending on how many rounds you clear, you will be rewarded.

After a round, a Crazy Duck will have the chance to appear, though it does this most often after Boss Rounds. Defeating it will restore part of the Goddess Statue's health. If players gather around the goddess statue, their health will be fully restored.

Aside from Broken Nightmare Crystals which may be obtained at any stage, additional prizes include the following:

There are 4 Round types: