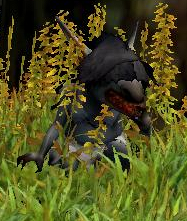 Old Gobbus' fourth grandson. He is the only remaining survivor of his family. He is currently located at Black Mountain Foothills where he discovered and joined other friendly Goblins at Marissa's Dryspring.

After escaping Temple Chapel, he couldn't find his grandfather Old Gobbus. He then decided to sneak aboard the Atlantis to move to Saint's Haven.

Goblynn was first discovered at Black Sovereign Domain attempting to fight the boss as a form of training. He confides in the player saying that he wishes to be able to defend himself against bad guys and to find his grandfather. The player did not reveal the fate of his grandfather but s/he agrees to help Goblynn train.

Later, Goblynn reports that his friends at Marissa's Dryspring were under attack by a scary monster. He requests the player's help to defeat the monster.