For the floor ornament, see this poor guy. 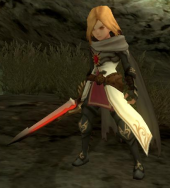 Gerrant, also known as the Gold Dragon is Argenta's brother and leader of the Six Heroes during The Dragon Raid. He and Argenta are two halves of the Sentinel Dragon that the Goddess Altea created. He was killed by the Leviathan that Bishop Ignacio revived.

Contrary to popular belief, Gerrant is not human. 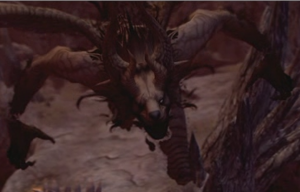 50 years ago, the Black Dragon Karas raised an army and threatened the world of Altera. Gerrant sent out a call to arms to all of humanity. Gerrant then became the leader of the Six Heroes, which consisted of himself, Velskud of the Saint's Haven Royal Army, Varnak of the Free Adventurer's League, Kasarana of the Astral Coven Sorceresses, Nerwin of the Silver Crescent Archers, and Terram of the Divine Knights.

After a long and arduous war, the Six Heroes finally defeated the Black Dragon but it was with complications. Gerrant turned into his Gold Dragon form to duel the Black Dragon himself. The Six Heroes who saw him was shocked by the fact that Gerrant was actually a dragon. Varnak and Kasarana were disgusted and felt betrayed. Velskud took Gerrant's right eye and stole the Black Dragon's lustre under the order of Kalahan. The other 5 heroes were too exhausted from the war and was unable to stop Velskud.

Though they were horrified by Velskud's supposed betrayal, they decided that it would be best to keep it secret lest it would curtail a huge uproar from the Saint's Haven citizens and royal family. Thus, history recorded the end of the war as the defeat of the Black Dragon due to the noble sacrifice of Velskud.

Gerrant decided to hunt down Velskud and to collect all the pieces of the Chaos Dragon.

Gerrant and Rose in the Saint's Haven castle basement

Gerrant is first seen at Rockthorn Gorge where he discovered Velskud. Velskud taunted him and ran away with Gerrant giving chase. Later, Argenta informs Gerrant that Velskud has kidnapped Rose the Descendant of the Ancients. Gerrant then visited Blackguard Stronghold to discover that Velskud has created a nest to thwart any attempt to rescue Rose.

After Argenta and the player created the Ancient Celebrant's Rune to penetrate the nest, Gerrant, Argenta, the Saint's Haven Royal Army and the player assaulted Velskud's fortress atop Black Mountain Foothills. Gerrant dueled Velskud in dragon form while Argenta rescues Rose. Gerrant was blinded while Velskud was taken out of commission. Gerrant then created his nest in Saint's Haven castle basement to protect Rose.

The Saint's Haven higher-ups learned that Gerrant is the Gold Dragon. They decided to keep the fact secret. Duke Stewart tried to offer Gerrant a Knight's Certificate in order to officiate Gerrant as a knight of Saint's Haven, but Gerrant refused.

Later Gerrant explains that he and Argenta are two halves of the Sentinel Dragon, one of the two dragons that the Goddess Altea created along with the Chaos Dragon in order to protect the world she created. Argenta is the Silver Dragon and she is three times as strong as himself, but she uses most of her powers to hold up the Monolith, the connection between Goddess Altea and the world (which explains how Velskud easily fell her in the Temple of the Sleepers). Altea's sister Vestinel was jealous of her and the beauty of the world she created, so Vestinel created the Void Dragon to attack Altea. The Sentinel Dragon and Chaos Dragon fought against Void Dragon, but Chaos Dragon was severely injured. 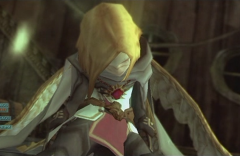 Later, Bishop Ignacio reports that Leviatha has revived and requests for Gerrant to defeat it. The Leviatha was a powerful dragon-like monster that the Six Heroes defeated and sealed away before the actual fight against the Black Dragon Karas. Gerrant has yet to recover from his recent fight against Velskud but was driven to defend Saint's Haven. He left his sword behind to hold up his nest at the Saint's Haven castle basement and went to confront the Leviathan with the player.

Gerrant was slain by Leviathan and explodes in a piercing golden light, and his lustre falls into the player's hands. With him gone, his nest is destroyed allowing Apostle Ignacio to kidnap Rose. Velskud then appeared to claim Gerrant's sword as his own.

Velskud left Gerrant's sword at Riverwort Marina for the player Warrior or Cleric to perform their second class advancement quest. In the Warrior's quest, Gerrant appeared to the player to help them advance their class. Velskud then appears to them to give them his last words and to reclaim the sword.

A younger version of Geraint is seen talking to Argenta, and mocked his older self for trusting and helping humans. He states that there is "something (he) must get back."

Geraint is seen alongside Argenta at Anu Arendel, where upon looking at the player, asks Argenta to confirm if he had helped the player in the past, to which Argenta acknowledges.

A horizontal sword slash that launches a fast sword beam.