Elena (also known as the Dark Elf Queen or Red-Eyed Dark Elf) is a high ranking Dark Elf who was an Apostle who served an unnamed man, and then later pursues her own goals. She was active during The Dragon Raid and The Siege of Carderock. She later met her demise in Chapter 3: Red-Eyed Dark Elf. 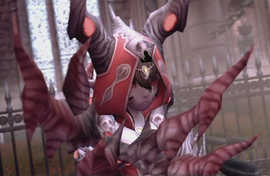 Elena's role in during the war is to assault Saint's Haven in an attempt to crush the base of the human's resistance. Elena's efforts were thwarted by Argenta and her army. From that moment on, she regards Argenta as her rival.

After the defeat of the Black Dragon, she escorted Velskud to Kalahan and retreated to replenish her army. Elena also took a sample of the Plague Rain to develop a poison that she will later put to great use.

The Siege of Carderock[edit | edit source]

10 years ago, Elena and her army chased Leon, Clara, and Rose towards Carderock Pass. The people of Carderock Pass took up arms to protect them. A furious battle ensued, with Elena's army attacking Carderock Pass from both sides.

Elena found this as an opportunity to put her poison to use, with devastating effects. William and his force drew a portion of Elena's army to Dread Forest. She then floods the forest with her poison and killed William. Also, Lucia at Basin of the Fallen was also killed by the poison. Both areas were permanently contaminated.

Elena also stored a large amount of poison at Dead Man's Road where it was protected by a significant force. One of Germaine's friends and his division attempts to destroy the poison but they were wiped out.

After a period of time, the Elena's army suddenly ceased their attack on Carderock Pass. Rose was reported to have disappeared. Elena retreated to plan her future moves.

The player first meets Elena at Temple of the Sleepers after s/he has recharged the Acclivity Drive. Elena commands Stompy to attack the player and it eats the Acclivity Drive then pins the player under its foot. Elena then demands to know the reason for him/her to be there. The player then reveals that Argenta is at Carderock Pass which was a great surprise to her. Elena then introduces the player to her new invention and plans to take revenge on Argenta and attack Carderock Pass.

Elena is later found flanked by Vuruha and Stompy at Inner Catacombs giving a speech to the Goblins of her army. She motivates the goblins to submit themselves to be turned into Hobgoblins.

Elena suffers her own poison

Elena and Stompy were later found at Dead Man's Road. After the player defeats Stompy and retrieved the Acclivity Drive, Elena became furious and decides to unload her entire quantity of poison onto the areas around Carderock Pass. Unfortunately, one of the pillars was are holding up the poison fell the wrong way and drenches Elena in poison. In her confusion, she falls off the cliff.

Elena was later seen at Sanctuary Nexus intending to steal the Pure White Orb and use it to cleanse the poison off herself. She engages the player in combat but fell quickly. She then transforms into a Shade due to her poison and she continued to fight. Eventually, Old Hobbus and his Poochum showss up to fight alongside the player to extract revenge on Elena. The Shade attempted a last attack on the player, but Old Hobbus pushes Elena to the side and off the cliff ledge. As they hang on for dear life, Hobbus commands his Poochum to tackle Elena, causing all three of them to fall to their presumable death.

If the player did not finish Old Gobbus's quests, he will not show up, leaving the player to fight Elena themselves.