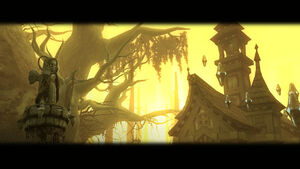 …As it says in the most ancient of texts, the world was corrupted when the Goddess Vestinel tricked her sister Althea into drinking a poison that began corrupting her soul. Falling into a deep slumber, the Goddess was condemned to a half-life, unable to ever die or wake up. The nightmares of Althea began corrupting the world that she had created, and nearly destroyed it…

…Unbeknownst to most, Althea still dreams and her nightmares still seep into our reality. It fell to the Priestesses of Darkness to study the dark magic of her nightmares and use that power to seal the wounds of the world.

-- The Secret Diary of Jacob, sealed by the Clerics’ Order under penalty of death.

In Jealous Atrium, players must protect the Goddess Statue, fighting through 35 spawns of bosses and monsters. Each run requires consumes an Abyssal Veil, 2 of which are obtained daily through the mailbox. During the dungeon, no players will be able to revive. If all players die or if the Goddess Statue runs out of health, the dungeon will end. Depending on how many rounds you clear, you will be rewarded.