Damage is the actions of players, NPC's, and Monsters that "hurt" the opponent. Damage in game will show up as numbers. Red numbers are the damage you take, and will decrease your health bar. White numbers are physical hits through attacking, but not with skills. Yellow numbers represent the damage skills do. Any number with a "*" (Asterisk) is magical damage. 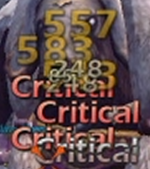 Classes such as the Warrior (Mercenary and Swordsman), Cleric (Paladin), and Archer (Sharpshooter and Acrobat) tend to rely on physical damage, while the Sorceress (Elementalist and Mystic) and Cleric (Priest) tend to rely on magical damage. However, a few of these classes have skills that rely on both Physical and Magical damage together, such as Clerics, Paladins, Swordsmen, Archers, Acrobats, and Sharpshooters.

Damage output of elemental attacks will have a symbol before the value.

Not all elemental attacks are from magical skills, but most do.

Average skill damage is calculated by the following formula:

All attacks (unless otherwise stated) have a chance to deal critical damage, shown as a large yellow number. Critical hits deal double damage. The chance of dealing critical damage depends on the Critical stat.

Critical damage can be resisted and deal reduced damage, shown as a large broken white number. Resisted critical is the same as a normal hit. The chance of resisting critical damage

depends on the Crit Resist stat. 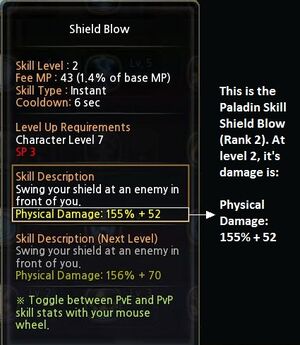 Shield Blow says it will use 155 percent of the character's damage and then add 52 to the total. Since a decimal is needed, it's converted into 1.55. Then using the physical damage of the character (which is 526), multiply by 1.55 and add 52 to the final number, which is 867,3 damage. This damage can be reduced further by the target's defense stat.