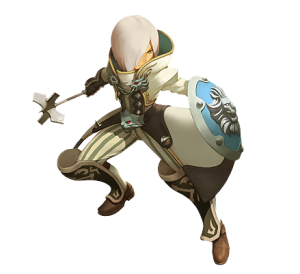 Gender: Male
The Cleric spent much of his childhood forgotten and alone. Placed in a brutal boarding school at the behest of his cold and distant father, the Cleric might have become bitter and angry. Instead when he came of age, he entered a monastery of his own free will and learned the disciplines of a highly principled holy man trained to use both mind and body in the service of good.

The Cleric begins his journey in Mana Ridge. 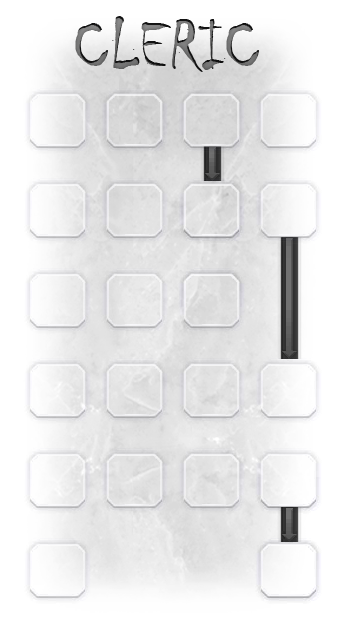 Paladin
Paladins are naturally the class with the most buffs and health in the game, being able to provoke monsters, he is ideal for attracting and distracting large amounts of mobs, while his party members pick off the strongest of enemies. Since they tend to have such high amounts of health, many buffs (however, most of their buffs are mainly for themselves) and defensive skills, they tend to be the last character standing in many difficult dungeons. They have moderate attack and but although they tend to have such high amounts of health they don't have as much Mana as other classes, so they often run out of it or end up conserving it until needed.

Priest
Priests have the potential to be the main healers of the class and become the main support of any party, being able to increase the attack and/or defence of the party and summon relics to heal allies or kill enemies. Although not as physically strong as a Paladin they make up for it with powerful magic attacks that are usually meant to deal with more then one enemy. Unlike Paladins they tend to have more Mana as well, making them able to use their skills longer. With their healing and wide area attacks, having the right Priest could easily increase the survivability of your party.

At level 15, head to Germaine in Carderock Pass and walk your way through the dialogue. For the first step you will be asked to complete a dungeon and will be teleported to the area the moment you are ready. To complete the dungeon, you must safely escort the Guardian of Faith (in the form of a Frost Bullpup) to the end of the dungeon.

Once you complete that task, you must face the Dragon Cultist, Jacob, in Marauder's Lair before you are able to pick your sub class.

If you fail the test, talk to Germaine again to repeat the dungeon.

Upon Job Advancement you will be asked to talk to Irine to receive your Specialization gifts, which include a Monk outfit of your choice (White, Blue or Red) and a Scroll of Unlearning which is used to reset your Skill Points. This item has a seven day duration after which it will disappear.