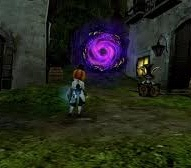 Chaos Rifts were tears in space-time that opened the way to a dark and fluctuating alternate dimension. Controlling access to this dimension and transporting brave adventurers between its realms are the true duties of the Dimensional Rabbits. Many heroes have succumbed to the chaotic energies of the Rifts and now defend them as twisted Shadow Heroes.

The Chaos Rifts were replaced by the Hero's Battlefield in patch 400.

Each Chaos Rift consists of several challenge rooms that are randomly selected from a larger pool. Players are expected to perform tasks such as killing a certain number of monsters, killing specific bosses, surviving for a certain time, protecting an entity or navigating a hostile area. When a room's task is complete a Dimensional Rabbit will appear and allow access to the next room.

The final challenge in a Chaos Rift is a full party of Shadow Heroes. These are Chaos-corrupted AI versions of player classes that can use the same abilities and the party always contains one of each main class. Characters below the recommended level may have difficulty with this Boss fight unless their equipment is exceptional.

The Rifts are Abyss - only dungeons that require a Dimensional Box Key to enter. The swirling purple entrances will simply not exist if the player does not have at least one key in his or her inventory when entering the Field. Each entry consumes one key even if the Rift is not completed.

The Rifts can be accessed from the portal chamber in Saint's Haven central tower. The specific portal for Chaos Rifts is located at the rear-left of the chamber (the 7 o'clock position) and has a Dimensional Rabbit standing guard as always. As with the Field entrance, the gate in the portal chamber will not appear for players without a Key.

The entrance to this level 24 Chaos Rift is located to the left of the Ashen Ruins.

The entrance to this level 32 Chaos Rift is in the Black Mountain Path, right next door to the cluster of dungeons containing Rockthorn Gorge.

The entrance to this level 50 Chaos Rift is in the middle of Liverwort Marina, between the East Armory and Mutant Habitat dungeon entrances.