The Atlantis docked at Saint's Haven 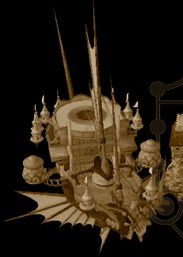 Detail of the Atlantis from the Saint's Haven map

A vast and majestic airship that carries passengers between Carderock Pass and Saint's Haven. At the time the player arrives in Carderock the ship has been sabotaged by the Black Knight and is grounded for repairs. Players must help engineer Hubert get his baby off the ground again by recovering its scattered parts and recharging its Acclivity Drive.

After the player repairs the airship it also seems to service the routes between the rest of the towns.