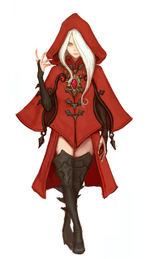 Argenta, also known as the Silver Dragon, is Gerrant's sister and one half of the Sentinel Dragon created by Goddess Altea. She participated in The Dragon Raid along with her brother and the Six Heroes. She is currently with Kasarana at Lotus Marsh.

Contrary to popular belief, Argenta is not human.

Argenta is quite harsh towards the player, constantly belittling him or her. She also feels that all the errands the player runs are done inadequately, complaining about details such as not enough of the item she asked for being brought, or the player's speed at which she or he completed tasks.

Argenta and her brother Gerrant was involved in The Dragon Raid. She disapproved of the 5 heroes that Gerrant enlisted. Argenta was responsible for defending Saint's Haven against the attacks of Elena and her army. From that moment on, Elena regarded Argenta as her rival although Argenta paid no attention to her.

Argenta first appeared in the level 12 quest, Pursuing the Black Knight, where she was tracking Velskud at Forest Sanctuary. When the player attempted to stop Velskud but was injured by him, Argenta found and healed the player. The player then met with Argenta and told her that Velskud has Rose, the Descendant of the Ancients, in his possession. Argenta was taken by surprise and enlisted the aid of the player to track him.

Later, she confronted Velskud at Temple of the Sleepers where she dueled him. She was severely injured while Velskud fled with Rose after absorbing Rose's power. Argenta then branded the player her slave, forcing onto him or her Argenta's Collar. She then relocated herself to Ashen Ruins where she took her time to recover.

While Argenta recovered, she commanded the player to contact Gerrant at Black Mountain Foothills and report to the higher-ups at Lotus Marsh, though this is impeded by the Black Knight sabotaging the Atlantis, disabling the only method of transport between Carderock Pass and Saint's Haven. Argenta then watched over the player while s/he worked to repair the ship and occasionally provides information. However, the player ran into Elena, a Dark Elf who Argenta fought against during The Dragon Raid.

In the chain of side-quests that she offers, Argenta was introduced to Adventurer David. At the end of the chain, David became her new slave before she returned to Saint's Haven. 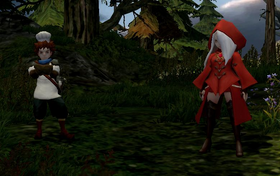 Argenta and David met the player at the airship landing, and then relocated themselves to Black Mountain Foothills. Argenta gained the aid of Gerrant to rescue Rose from Velskud from his fortress atop Black Mountain Foothills. There, Gerrant discovered that Velskud has created a nest around his fortress, thwarting any attempt to rescue Rose. Argenta then ordered the player to help her create the Ancient Celebrant's Rune to penetrate the nest.

Finally, Argenta, Gerrant, and the Saint's Haven Royal Army assaulted the fortress. Gerrant turned into Gold Dragon form and fought against Velskud in Black Dragon form. During their duel, the player and the royal army battled against Velskud's army while Argenta ran ahead to rescue Rose. The rescue mission was a success and Velskud was severely injured and defeated, despite Gerrant losing his remaining functional eye. Gerrant then created his nest at the Saint's Haven castle's basement to protect Rose, much to the dismay of Argenta. Argenta then left to meet Kasarana at Lotus Marsh.

Argenta met with Kasarana and requested her to develop a medicine to heal Gerrant's eyes. She had David deliver the medicine to him; however, Gerrant had been killed.

Argenta later sent David to explain to the player that a person who has been contaminated by a dragon's blood and touched a dragon's lustre will turn into a monster.