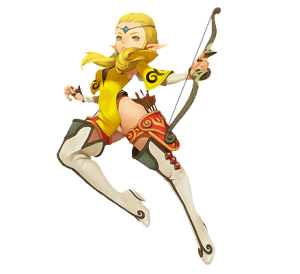 Willowy and flexible as her bow, the Archer attacks multiple enemies at once! The Archer hails from Arendel, the birthplace of all elves. As part of the lifecycle of the elves, she is on a quest for "Telezia", the realization of her destiny and the discovery of her true name. Should she succeed, she will return in honor to Arendel to enter her "second life"- a transformation into a beautiful tree at the moment of her death. To fail in her quest and die elsewhere means oblivion as she turns into a pitiful mound of dust.

The Archer begins her journey in Ironwood Village. 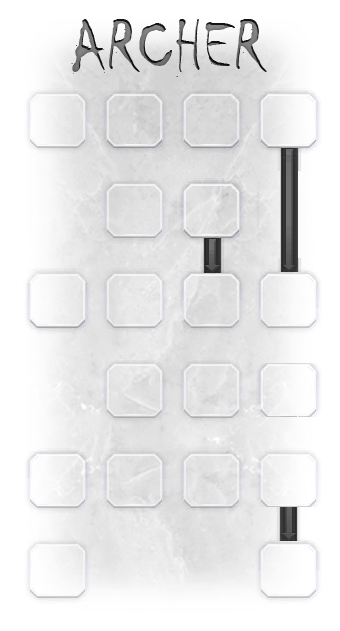 Acrobat
Acrobat deals quick combo attacks after approaching an enemy. Her nimble attacks are almost too quick to be noticed.

Partially giving up their ability to shoot from afar, Acrobats prefer to attack up close with their natural speed, executing lightning fast attacks. Fast and flexible with their skills, most of their combos are chained to knock an enemy into the air, constantly barraging them with furious attacks. All of Acrobat's skills are extremely flexible, making it easy to chain one skill into the next, generally making it hard to predict an Acrobat's next move. Despite having generally low defense, Acrobats have an arsenal of evasive skills and staggering attacks to help escape an opponent's clutches. Their primary weapon is the Shortbow.

Bowmaster
Bowmaster is an expert in long range attack. No one can outwin her in attacking far-flung enemies.

Making use of a bow's potential, Bowmasters excel at long range combat, giving them the ability to bash enemies with a flurry of arrows before they can even notice. However, because they lack close ranged skills, they are extremely vulnerable if caught up close, and they do not have the variety of escape skills such as the ones Acrobat possesses to make up for their poor defense. To make up for this, however,Bowmasters have the longest range out of all the classes,making it difficult for monsters to actually reach them in the first place. Although they may not seem like a threat at first, if given clear shot, they can be one of the most devastating classes on the battlefield. Their primary weapons are Longbows and Crossbows.

At level 15, go to your corresponding Skill Trainer in Carderock Pass and start your class change quest, "Telezia".

You will be teleported to a shooting range where brown and white dogs will spawn across from you. Shoot the brown dogs only, not the white ones. About two minutes in, "Casper", the white dog, will start to appear.

Choosing a class specialization requires completion of the Seeking Destiny quest and returning to the Skill Trainer.